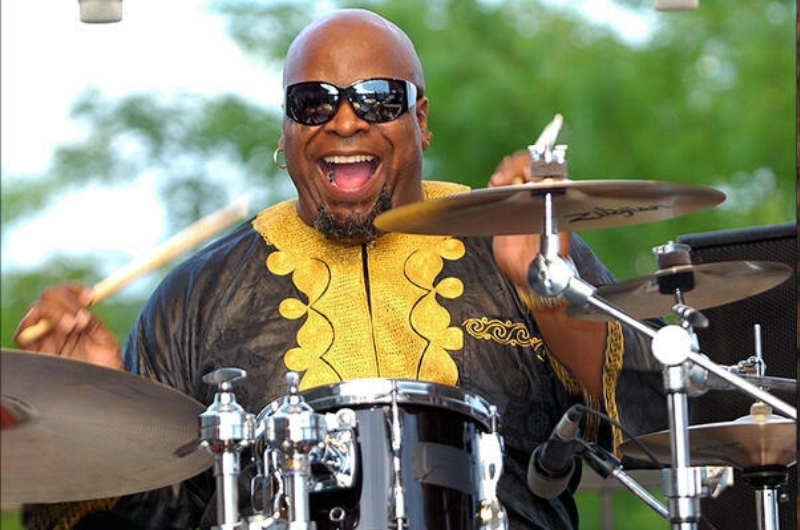 Shamakah Ali music career began in his hometown of Memphis Tennessee, when he started playing drums with various local Blues artists on the world famous BEALE STREET at W.C Handy Park, he says back before the Blues Foundation was formed.

Shamakah’s first recording band The SKWARES debuted on Atlantic Records Cotillion label in 1983, The Skwares 2nd album was released in 1987 on Poly Grams Mercury label. CHARLIE WILSON of the GAP BAND produced. Shamakah continued to perform across the U.S. until 1980.

For the next few years Shamakah consistently toured in the Far East; including dates in Japan, Guam and Korea. Upon returning to the U.S.A, Shamakah began touring with the legendary Soul & Gospel singer, AL GREEN. Shamakah also toured with Blues legend ALBERT KING, until he was offered a full time position with THE BARKAYS, the late OTIS REDDINGS backing group led by surviving member JAMES ALEXANDER. Shamakah played drum on two albums with The BARKAYS: ’48 Hours’ on the BASIC label and “The Best Of” on K-Tel Records. The commercial success of the recordings resulted in a major tour across the U.S. and Japan. In 1994, Shamakah joined the 80’s soul/crossover group THE S.O.S. BAND. spending three dedicated years as an essential part of the revitalization of the trademark S.O.S. SOUND.

Shamakah was requested to drum for ISAAC HAYES Birthday Bash held at the COPACABANA in New York City in 2000. That evening he backed up the legendary CHAKA KHAN, EDDIE FLOYD and HOWARD HEWETT. Shamakah also was requested to perform at a birthday bash held at the HOLLYWOOD ATHLETIC CLUB in honour of respected music producer/arranger MIKE POST.

Shamakah’s trademark funky beats landed him a seat playing with THE UNITED WE FUNK ALL STARS consisting of: THE BARKAYS, THE SOS BAND, CONFUNKSHUN, SWITCH, THE DAZZ BAND, CHARLIE WILSON of the GAP BAND, REGINA BELLE, LENNY WILLIAMS of TOWER OF POWER, and GEORGE CLINTON of P. FUNK fame. Shamakah also has backed these artists when they performed as solo acts. As part of the BARKAYS and DAZZ BAND he has been a regular player at the Official GRAMMY AWARDS after-parties held in Los Angeles. He has been invited to perform at the annual BLUES BALLS in Memphis Tennessee, sharing the stage with the legendary JERRY LEE LEWIS, ISAAC HAYES, and AL GREEN.

Shamakah’s ability to play many styles had him drumming on the National tour Just the 4 of Us backing Jazz vocalist PHIL PERRY, HOWARD HEWETT of SHALAMAR, GLEN JONES and TONY TERRY. Shamakah also backed LIONEL RITCHIE when he performed on Toronto’s morning show CANADA A.M. and CANADIAN IDOL.

He has several movies to his drumming credit including the soundtrack of RUBYS BUCKET OF BLOOD starring ANGELA BASSETT.

Shamakah, both on stage and record, could best be described this way: “Like a powerful Mac Truck cruisin’ down the road!”